Showing posts from October, 2008
Show all

- October 23, 2008
The James Hartline Report - On The Frontlines Of The Culture War - October 23, 2008 BATTLE ROYALE: The Battle Begins on October 28, 2008 Battle Against Government-Sanctioned City Council Resolution Which Will Force All San Diegans to Oppose California Marriage Protection Amendment "Whether they like it, or not" Begins on Tuesday, October 28, 2008 with a Prayer Rally and Citizens Standing Up For Their Rights at the San Diego City Council If the San Diego City Council passes resolution to Oppose Prop. 8, all San Diego voters will be forced to support a government-sanctioned campaign of opposition to traditional marriage, "whether they like it, or not!" Political Leaders, Ministers, Community Activists and Big Number of Prop. 8 Supporters will participate in Oct. 28th Prayer Rally and City Council Hearing as Battle Royale Is Fought Over Unpopular San Diego City Council-approved "No on 8" Resolution (JHReport) A number of nationally promine
2 comments
Read more

- October 19, 2008
The James Hartline Report - On The Frontlines Of The Culture War - 50,000 Strong & Growing! Action Alert! October 20, 2008 San Diego City Council Declares War On Prop. 8: The California Marriage Protection Amendment City Council Rules Committee Violates Endorsement Rules in 4-1 Vote to Send Resolution Recommendation to the Full San Diego City Council for a Vote Which Will Declare the People of San Diego are Opposed to Prop. 8 and Limiting Marriage to One Man and One Woman James Hartline Calls For Citizens To Stand Up For Prop. 8 and Marriage Defined As One Man Married to One Woman During Upcoming October 28, 2008 City Council Vote (Action Alert) On October 3, 2008, Joe Nelson, the Director of Intergovernmental Relations for the City of San Diego, issued an official memorandum to the San Diego City Council and the mayor outlining the rules for endorsing California's upcoming statewide ballot initiatives. This memorandum was given to the city council rules committee as
3 comments
Read more

A Prophetic Insight: An Error Will Be Made and History Will Be Changed

- October 19, 2008
A Prophetic Insight: An Error Is Going To Be Made. And History Will Be Changed. The Bad Men Will Make An Error and The Underrated Good Men Will Win Because Of This Error.
Post a Comment
Read more

- October 13, 2008
The James Hartline Report Over 50,000 Strong & Growing! - On The Frontlines Of The Culture War - A Major Action Alert October 13, 2008 700 Volunteers Needed For The Largest Prayer Rally in the History of California: The Event: The Call Where: San Diego, California When: October 28th - November 2nd and An Exclusive James Hartline Report Announcement: We are announcing an All Day Prayer & Fasting Event Nationwide: Friday - October 17, 2008 and The James Hartline Report - Special Announcement: We Are Participating in: A Massive Nationwide Pray For Sarah Palin Network And Now, Here Are The Details "And if the trumpet doesn't sound a clear call, how will the soldiers know they are being called to battle?" I Corinthians 14: 9 For the past eight years, I have prayed and fasted for California. I have cried out to God to deliver our state and our nation from the destruction that the Bible warns us will come to our land because of the gross sins and abom
3 comments
Read more

- October 09, 2008
Farrakhan on Obama: 'The Messiah is absolutely speaking ''Barack has captured the youth,' will bring about 'universal change' October 09, 20088:03 pm © 2008 WorldNetDaily Nation of Islam leader Louis Farrakhan, another powerful Chicago-based political figure associated with the Rev. Jeremiah Wright and other long-time associates of Democratic Party presidential candidate Barack Obama, is leaving no doubt about what he thinks of the leader in the campaign for the White House. He says when Obama talks "the Messiah is absolutely speaking." Addressing a large crowd behind a podium with a Nation of Islam Saviour's Day 2008 sign, Farrakhan proclaims, "You are the instruments that God is going to use to bring about universal change, and that is why Barack has captured the youth. And he has involved young people in a political process that they didn't care anything about. That's a sign. When the Messiah speaks, the youth will
Post a Comment
Read more

- October 09, 2008
NEWS ALERT: Christians Score Another Victory! McDonald's Dumps Its Pro-Gay Business Plan! McDonald's pledges neutrality in culture battle The American Family Association (AFA) is ending its boycott of McDonald's. Mississippi-based AFA called for the boycott in May after the fast food giant joined the National Gay and Lesbian Chamber of Commerce. McDonald's has notified the pro-homosexual organization that McDonald's vice president Richard Ellis resigned from the board of directors of NGLCC and his seat on the board will not be replaced. In a press release on Thursday morning, AFA reports that in an email from McDonald's to its franchise owners the company stated its policy is "to not be involved in political and social issues." Randy Sharp is director of special projects with AFA. He says McDonald's has pledged to remain neutral in the culture war surrounding homosexual marriage. "The franchise owners understood very early that this w
Post a Comment
Read more

GAYS VERY WORRIED: BIG SURGE IN MANY POLLS FOR YES ON 8 CAMPAIGN.

- October 09, 2008
Foes of gay-marriage ban say poll shows Prop. 8 leading - From Los Angeles Times Gay activists very concerned they will lose Prop. 8 battle! What this says is that the majority of Californians finally have the truth told that they don't agree with radical gay agenda! The campaign says it is being outspent and urges more donations. Both sides ramp up outreach to Latinos. By Jessica Garrison, Los Angeles Times Staff Writer October 8, 2008 Opponents of a campaign to ban same-sex marriage in California said Tuesday that a new poll shows them in danger of losing -- unless people step forward with more contributions to pay for No on 8 television commercials. The opposition has enjoyed a healthy lead in several surveys taken by polling organizations that do not have a stake in the campaign. But officials with the No on 8 campaign held a conference call with reporters Tuesday to announce that their own poll showed the measure would pass by four points. Opponents attributed the result
Post a Comment
Read more

- October 07, 2008
With millions of dollars flooding the Yes on 8 Campaign from a multitude of grassroots voters vs. millions of dollars from a select group of elitist gay activist organizations funding the No on 8 Campaign, it is clear that Californians are ready to ban same-sex weddings in the Golden State. SACRAMENTO, October 7 /Christian Newswire/ -- Yes on 8 is leading the race, 47% Yes to 42% No, with 10% undecided, according to a new CBS 5 (San Francisco) poll. That is up 3% for Yes and down 7% for No since September 25th - a total of a 10% gain for Yes. On September 25th, CBS 5's poll showed the race at 44% Yes to 49% No, with 7% undecided. Yes on 8 is attributing the gain to their first television ad, which was released last week, and to their massive door to door campaign. The ad features footage of San Francisco Mayor Gavin Newsom arrogantly speaking of gay marriage, declaring to Californians, "The door's wide open now. It's gonna happen, whether you like it or not!" T
3 comments
Read more

- October 06, 2008
Record Donations Flood In From Californians MEDIA ADVISORY, October 6 /Christian Newswire/ -- The Protect Marriage Coalition reported today that it has received contributions of nearly 22.8 million dollars since the first of June when Proposition 8 qualified for the ballot in California. This, added to earlier contributions of 2.4 million dollars last Spring, brings the total dollars raised in support of Protect Marriage to $25.4 million. The state filing by the Protect Marriage Coalition today was nearly 5,000 pages long, recording tens of thousands of individual donations. Protect Marriage campaign manager Frank Schubert acknowledged the enormous fund-raising success "shows the strength of our cause and the tremendous grass roots support for traditional marriage across the state." About two-thirds of all donations received have been $100 or less. Over 62,000 donations have been received to date. Ninety- five percent of all donations have come from within California. In
Post a Comment
Read more

- October 02, 2008
If you would like to learn an important lesson in how to solve, or not to solve (depending on one's perspective), America's financial crisis, then please watch this facinating and informative video on resolving financial disputes. Okay, what is your solution then?
4 comments
Read more

Where Did Homosexuality Originate From?

- October 02, 2008
James Hartline, publisher of California Christian News and The James Hartline Report is in the process of writing an exciting series of books titled "The Chronicles of Sodom." There is great buzz among many religious circles as they await the release of volume one of this revolutionary tale. Among the subjects that will be covered are: Where did homosexuality originate from? What was the significance of the ancient city of Sodom and what moved God to judge and destroy that city among all of the cities on the earth at that time? What are the consequences for mankind with regards to the prophetic word in the Bible which says in the last days prior to the Lord judging the earth and we enter into the 7 year tribulation period, that the ancient city of Sodom would rise again as will the demonic spirits that were housed in ancient Sodom? Question: Where do you think homosexuality first originated? Who caused it and for what purpose? Your opinions would be greatly apprecia
20 comments
Read more 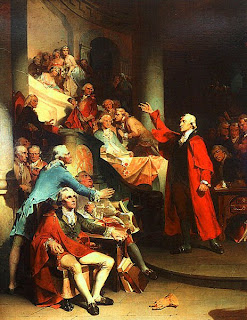 (photo is of Patrick Henry who declared "Give Me Liberty or Give Me Death) You can watch the following video from the statewide simulcast from Sept. 25th major event for the passage of Prop. 8. Prop. 8 is the state initiative for restoring the definition of marriage in the California Constitution. Earlier this year, four activist judges on the California Supreme Court violated the separation of powers by legislating from the bench, something that is the legal duty of the legislative branch to do. http://link.brightcove.com/services/player/bcpid1815813325 In overriding the will of 61% of California voters who passed Prop. 22 in 2000 (marriage is one man and one woman), the California Supreme Court ordered a law to be implemented that forced the state to issue a previously non-existent kind of marriage license where men can marry men and women can marry women. In violating California's constitution, these odd and dangerous marriage licenses have now been is
2 comments
Read more
More posts