Showing posts from March, 2011
Show all

Will the pastors of San Diego's one million Christians speak out against the campaign of radical lesbian District Attorney Bonnie Dumanis? 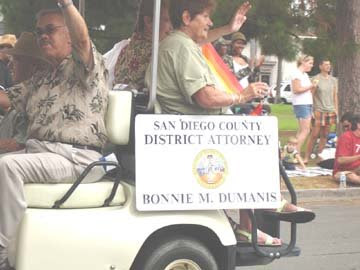 photo: Bonnie Dumanis during one of her many unappealing drives through the San Diego Gay Pride Porn parades. Will the pastors of San Diego's one million Christians speak out against the campaign of radical lesbian District Attorney Bonnie Dumanis to become our city's next mayor? Dumanis, who lives with her lesbian lover and has marched in scores of pornographic gay pride parades, is the three-time elected Republican district attorney of San Diego. DA Bonnie Dumanis announces run for mayor in 2012 - San Diego, California News Station - KFMB Channel 8 And will voters find it a hard pill to swallow when thousands of San Diegans were losing their homes and jobs during the economic downturn that Dumanis was taking a massive pay increase as San Diego's long term bureaucrat district attorney?
4 comments
Read more
More posts