Showing posts from May, 2009
Show all

- May 26, 2009
From City Journal : by Daniel J. Flynn Drinking Harvey Milk’s Kool-Aid Lionized by Hollywood and California state legislators, the real Milk was a demagogue and pal of Jim Jones. 21 May 2009 This Friday would have been slain San Francisco supervisor Harvey Milk’s 79th birthday, and California state senator Mark Leno has introduced legislation to mark the date with a state holiday. The bill doesn’t call for a furlough from work, but instead instructs the governor to proclaim a “Harvey Milk Day” and designates “that date as having special significance in the public schools and educational institutions” and encourages them to “conduct suitable commemorative exercises.” The legislation passed muster with the state senate in overwhelming fashion last week. Though only about one in five Californians polled supports the measure, and Governor Arnold Schwarzenegger vetoed a similar bill last year, Leno is optimistic. “If there’s one thing Arnold Schwarzenegger understands, it’s box office,”
Post a Comment
Read more

- May 24, 2009
BREAKING NEWS: International news agencies are now reporting that the Communist rogue nation of North Korea has just announced they have successfully tested another nuclear bomb. This continues a long feared concern that the North Koreans are conducting the nuclear tests for the Islamic terrorist nation of Iran. Those who continue to sidestep the reality of Biblical prophecy that these are the Last Days, are going to soon find themselves in a dark world void of security and void of a relationship with the only thing that can save them: the Lord Jesus Christ. SEOUL, South Korea – North Korea announced Monday that it successfully carried out an underground nuclear test, weeks after threatening to restart its rogue atomic program. The country's official Korean Central News Agency called Monday's test "part of measures to bolster its nuclear deterrent for self-defense." President Lee Myung-bak convened an emergency security session. His spokesman, Lee Dong-kwan, confi
3 comments
Read more

- May 22, 2009
Watch The International Mega-Hit Ex-Gay Music Video Here The Ex-Gay Story in the Pop Music World By Roberto Marchesini NARTH International Representative - NARTH Italy's "Festival di San Remo," the most important musical happening in my country which is seen on T.V. by millions of Italians, became the unlikely platform this year for a powerful ex-gay testimony. The singer, Giuseppe Povia, winner of the festival in 2006, presented a song entitled, "Luca Era Gay" (Luca was once gay) -- SEE VIDEO HERE The title of his song, implying that some gays can change to heterosexuality, was sufficient to destabilize the Italian gay movement. Gay activists threatened to block the festival, and Europarlimentary member Vittorio Agnoletto asked for a European resolution to stop Povia from peforming the song. Povia, himself, received death threats. The gay association "Everyone" denounced Povia to the Procura of the Republic for alleged "homophobia." These
6 comments
Read more 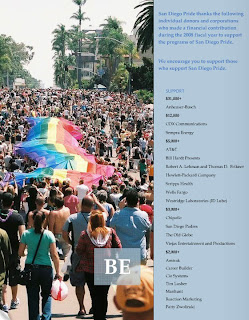 World Net Daily has just published a breaking news report on the San Diego Gay Pride - Padres Youth scandal. Free gifts attract kids to 'gay' day at ballpark -- Homosexuals schedule 'pride' event for same time as children's promotion Posted: May 21, 2009 10:55 pm Eastern By Chelsea Schilling© 2009 WorldNetDaily The San Diego Padres will once again offer a free event to attract children on the same day that the area's homosexual organization celebrates 'gay pride' at the ballpark. As WND reported in 2007 , the Padres' July 8 game presented free caps to children while also formally recognizing San Diego Pride. The promotional event this year, on June 7, will feature a Padres photo day presented by Sony. Fans will be allowed to take pictures of their favorite players, coaches and the Swinging Friar on the field prior to the game. Macy's will present children younger than 14 with a Padres photo frame. The Major League Baseball tea
1 comment
Read more

- May 20, 2009
The James Hartline Report Action Center Action Alert! May 20, 2009 A Major League War Against San Diego's Youth: The San Diego Padres Intentionally Schedule Another Youth Event At Petco Park During June 7th, 2009 Petco Park Gay Day Celebration Padres schedule Photo Frames for Kids (14 & Under) at Petco Park DURING "Out at The Park" Gay Pride Celebration : Making June 7th a Strike Out Against Family Values by Padres Team San Diego Gay Pride organization also reports that Padres gave $3,000+ in 2008 to pro-gay marriage San Diego Gay Pride group - the same Gay Pride group with a history of hiring a convicted pedophile to entertain minors inside the San Diego Gay Pride Festival (JHReport) A nationally recognized Christian activist is shining a very public spotlight on the evolving relationship between the San Diego Padres and a homosexual organization that has a history of employing dangerous sex offenders to work in its annual festival and parade. The
3 comments
Read more

It Ain't Hip To Be A Hypocrite: The Idiots That Run The Miss California - USA Organization

- May 11, 2009
While the rabid pit bulls of perversion that are directing the sinking ship of the Miss California - USA organization continue on their failed mission of trying to silence the steady platform of Miss California Carrie Prejean, there are now dark and disturbing details coming forth about the sordid history of the organization's leadership. Whether state pageant co-director Keith Lewis is so adamant about his support of gay marriage out of fear that if he defends Prejean he will see a mass exodus of homosexual make-up artists and hairdressers from next year's state beauty pageant is anyone's guess. What is known is that the pageant's other co-director Shanna Moakler has a pornographic history that makes Prejean even more the victim of the state organization's vendetta against morality. Shanna Moakler has been the loudest, pro-homosexual voice within the Miss California organizational leadership. Recently, she performed in a public announcement ad for promoting ho
4 comments
Read more
More posts