Showing posts from September, 2011
Show all

Mitt Romney's dishonest claim of not being a career politician is the equivalent of Bill Clinton's, "I did not have sex with that woman." 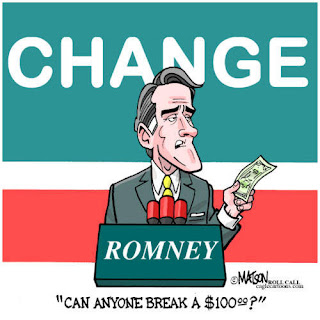 Mitt Romney's dishonest claim of not being a career politician is the equivalent of Bill Clinton's, "I did not have sex with that woman." In 1962, Mitt Romney participated in the campaign in which his father was elected Governor of Michigan. George Romney was re-elected twice; Mitt worked for him as an intern in the governor's office, and was present at the 1964 Republican National Convention. Mitt Romney worked for his mother Lenore Romney's eventually unsuccessful 1970 campaign for U.S. Senator from Michigan. Romney lost to Ted Kennedy in his 1994 bid for the U. S. Senate. Romney served as Massachusetts governor from 2003-2007. Romney ran for president in 2008. Romney is running again for president in 2012. And, in 2011, Romney is still clinging onto his charade claim of not being a career politician.
1 comment
Read more
More posts